Although white box switches have been emerged for years, many people still tend to consider switches first from branded companies first when buying a fiber optic switch. The adoption of white box switch has been limited to niche companies that have large engineering departments. Over the years, the market of fiber optic market has been dominated by select vendors like Cisco, HP, Arista and Juniper. However, white box switch is coming to break the ice.

The phrase “white box” has long been used to apply to no-name computers. The same ODMs (original design manufacturers) that produced them are getting into the game of manufacturing white-box switches. White-box switches look just like any other switch, but they are not installed with operating systems (OS). Since every switch needs an operating system, white box switches are useless without software. The OS can be chosen by the customers based on their actual needs. This OS needs to seamlessly integrate with existing L2/L3 topologies and support a basic set of features. Beyond this, there should be new capabilities delivered as a result of “opening up” the network switch. Also many third party provide white box switches that are already operating systems like ICOS or Cumulus while they are rolling off the production line.

White Box Switch: What Makes It Superior over Traditional Switch

Despite the fact that the use of white box switches has been limited for a couple of reasons, such as customer worries for product quality and technical support, white box switches have come a long way from where they were. And I believe they are now ready for a broader market. I know some of you may doubt it and think it is not the one for you when buying a gigabit Ethernet switch. But if you dig into it, you can see the white boxes have improved significantly in the following areas: 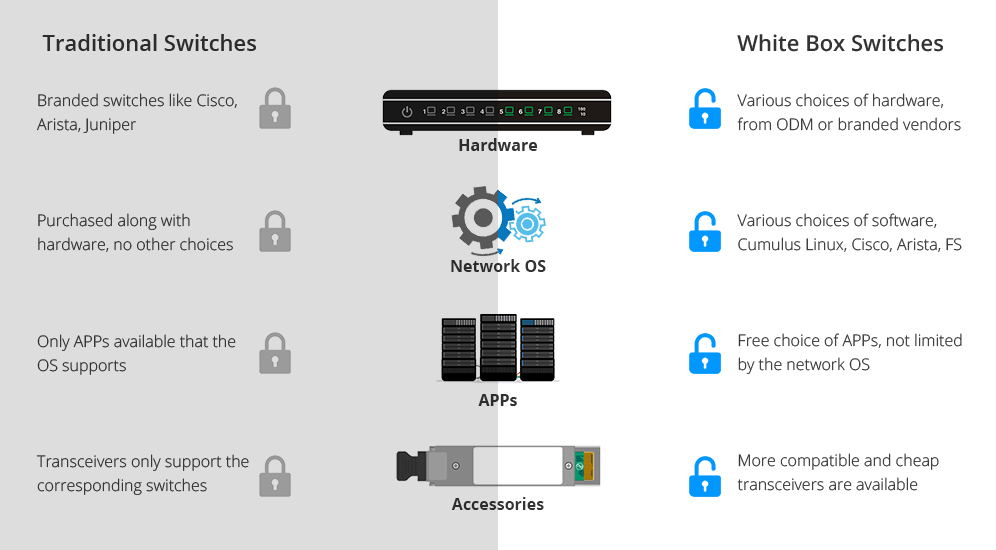 1.High flexibility, as their main function is to meet the data demands.

2.These are helpful to provide efficiency and productivity to the business.

7.The SDN controller is accountable for centralizing the network.

8.White box switching software can be easily attainable through any reseller or partner directly.

Maybe a white box gigabit switch is not the best gigabit switch in your heart right now, it is still undeniable that white box switch will be the future trend for data center siwtches. Many mainstream networks vendors also began to provide white box switches. Also, these will come shipped with tried-and-true network operating systems from vendors such as Pica8 and Cumulus.