Service providers and enterprise data centers are undergoing an infrastructure transformation to achieve higher levels of performance and scalability that may explain why the demand for 100G network is always on the rise. Optical transceiver, therefore, is usually considered to be a vital component to ensure the flexibility and reliability of the whole system. 100G transceivers have become a preferable alternative for those bandwidth-hungry applications in data centers to accelerate data flow. In this article, we will introduce several 100G transceivers which are commonly seen on the market. And emphasis will be put on the 100G QSFP28 transceiver.

With improvements in technology, CFP2 and CFP4 specifications have appeared to allow higher performance and higher density. Having similar electrical connection with a CFP transceiver, CFP2 transceiver and CFP4 transceiver specify a form-factor of 1/2 and 1/4 respectively in size of a CFP transceiver. These three modules are not interchangeable, but would be inter-operable at the optical interface with appropriate connectors.

And here comes the dominate 100G transceiver—100G QSFP28 transceiver, which is implemented with four 25 Gbit/s lanes. With an upgraded electrical interface, it is capable of supporting signal rates up to 28 Gbit/s, thus making it as easy to deploy 100G networks as 10G networks. Moreover, it has a strong ability to increase density, decrease power consumption, and decrease price per bit. With QSFP28, the way to migrate to 100G can change from 10G-40G-100G to 10G-25G-100G or 10G-25G-50G-100G, which can largely simplify the cabling in data center and effective decrease the cable density and the cost.

What Can We Benefit From QSFP28?

Giving a look back to the evolution of 100G modules in the past few years, all these changes are closely related to factors like power and cost, which matters a lot to every data center and server room. Thus, the reason why 100G QSFP28 emerges is partly explained. Then, what exactly can QSFP28 bring to us? 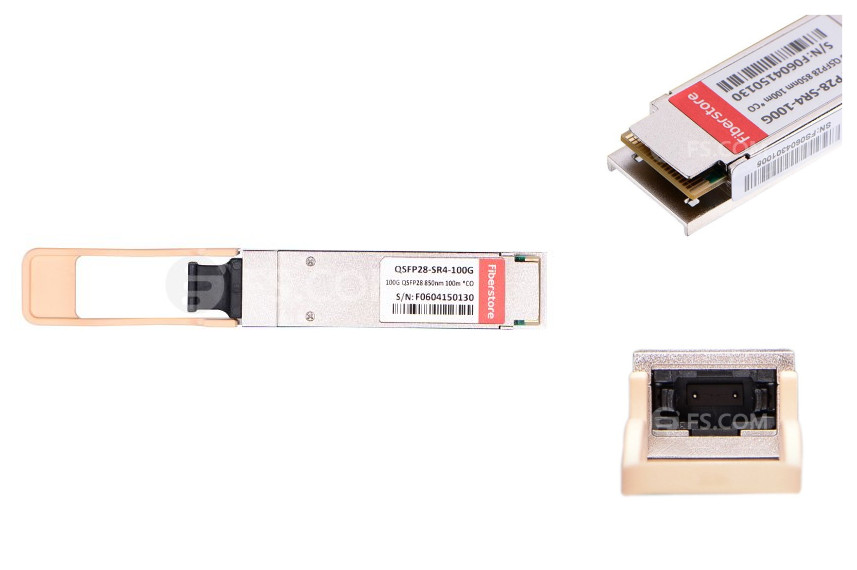 Higher Port Density: The first generation of 100G transceiver is CFP, which is very large. When it comes to CFP2 and CFP4, the next generation of 100G modules, their sizes decrease a lot. With the same footprint and face plate density as QSFP+, QSFP28 is even smaller than CFP4, and its high port density is also an overwhelming advantage. Generally, up to 36 QSFP28 can be installed on a 1RU switch on the front panel.

Lower Cost: QSFP28 is able to save considerable amount of money with higher port density and lower power consumption. In addition, QSFP28, implemented with four lanes, increases the transmission capacity of every lane from 10G to 25G, which can effectively decrease cost for each bit.