Driven by the demand for more bandwidth for data center, networking is challenging interconnect technologies like Ethernet, Infiniband, Fibre Channel, and Serial-Attached SCST (SAS). Transceivers such as SFP+, QSFP+ or CXP can accept a passive copper-based cable for lengths of 5-7 meters or an actively copper-based cable for lengths up to 15 meters. To seek lower cost, lower power consumption and lower link latency over longer distances, active optical cable (AOC) emerged.

AOC is a cabling technology that accepts the same electrical inputs as a traditional cooper cable. But it uses optical fiber to joint the connectors terminated on each end of the cable. Active optical cable uses electrical-optical conversion on the cable ends to improve speed and data transmission distance of the cable not sacrificing compatibility with standard electrical interfaces. 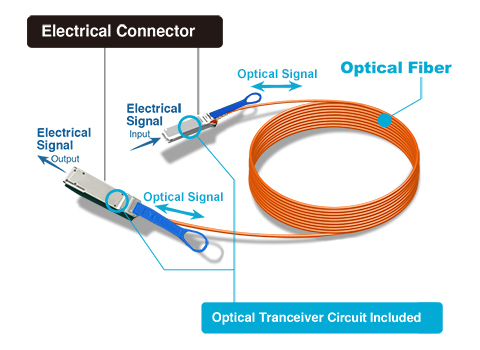 Nowadays, the AOC market is fast growing. How does this happen? Then the following will tell a few advantages of AOC by comparing it with copper cable and optical transceiver.

As the name implies, active optical cable comes with optical connectors on each end that provide electrical-optical conversion and optical transmission. So users can remove the pluggable copper-based transmission device (usually either a CX-4 or QSFP) and plug in the active cables transceiver/connector, whose form factor mirrors that of the copper device it replaces. Compared with the transceiver products, AOC can avoid some of the obstacles that fiber has encountered in data centers. What’s more, it has much greater simplicity and reliability, as it’s factory terminated. And there is no risk of mis-matching polarities, dirt entering the assemblies, or different manufacturers’ tolerance mismatching.

Because of these advantages, the demand for the AOC is increasing as an alternative to copper cable. Some vendors such as Fiberstore have rushed to develop products to meet this hot spot. Fiberstore keeps improving its product line of AOC in order to better satisfy the application of 10G, 40G to 100G Ethernet. At present, there are a variety of AOCs in the market, such as 10GbE SFP+ AOCs, 40Gbps QSFP+ AOCs and 120G CXP AOCs.

The market is expected to grow to just under $100 million and 450,000 units by 2015 according to some forecasts. The increasing growth in commercial data centers and the advent of high speed transmission will make AOCs achieve sales of around US $1 billion by 2018 that means the future of AOCs is bright.