In the case of CWDM we are talking about no amplifier, in fact, CWDM occupy so much of the optical bandwidth and using the amplifier is unrealistic.

Moreover, in order to use uncooled sources, the channels are so spaced in frequency that there is no problem in using thin film filters to select them, avoiding any distortion due to filter cascading.

The challenge is designing CWDM systems is to satisfy the requirements in terms of power budget by maintaining the cost effectiveness that customers except from this technology.

There exist two types of CWDM systems on the market, that are directed to different applications: pure CWDM and mixed DWDM and CWDM.

Pure CWDM systems are exclusively tailored on CWDM technology. Generally, they are simple machines whose main added value is the low cost.

These systems are generally completed with regenerators and fixed ADMs based on thin film technology and are used in the metro access area and in rural areas where the local exchanges are particularly far from the hub of the regional network.

Mixed CWDM and DWDM systems are instead capable to host on the same platform both CWDM and DWDM channels following the ITU-T standard channel allocation. The current international telecommunications union (ITU-T) proposal for CWDM system include placing 18 CWDM channels on a 20-nm spaced grid that spans the wavelength range from 1270 to 1610 nm. ZWP fibers have low attenuation over the 1360 to 1440 nm spectral range that comprises the E-band, allowing efficient transmission on the four CWDM channels located within the E-band. Thus, the modern full spectrum fibers enable transmission on the 16 now-loss CDWM channels located over the wavelength range from 1310 to 1610 nm. 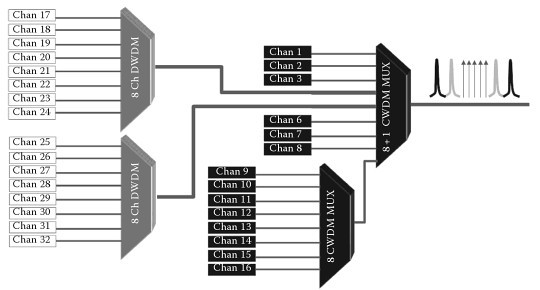 These kinds of system have higher cost with respect to pure CWDM, but allow slower growth after the installation using CWDM channels and faster when using DWDM configuration.

Typical power budget of 2.5Gbit/s CWDM systems are 8dB for short-haul applications, 12dB for long-haul, and up to 16dB for extremely long connections. 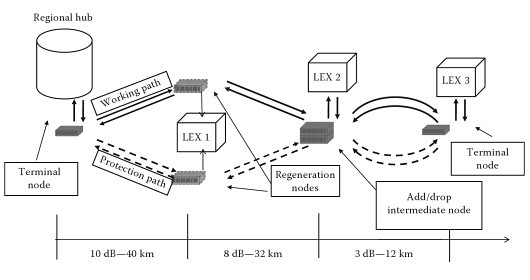 An example of CWDM system used to backhaul three small local offices to a hub. The adopted architecture is a protected bus that exploits the fibers already installed in the field. The first local exchange is reached by a complete path diversity, also using two divers OADMs, since there were available two nearby but different paths but the OADM location is only one since two nearby locations were not available. In considering this architecture, it is to take into account that in rural areas, the points of presence not always are real central offices, but could also be street cabinets where the local equipment is located.

If you want to know more about CWDM, welcome to visit the website. http://www.fs.com/