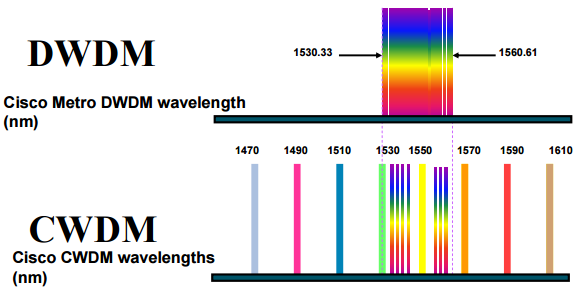 We all have a knowledge of CWDM VS DWDM technology. but how to choose suitable solution is what we need to know. As we know, because of its costs, DWDM is more suited to longer-reach applications if developers begin to value the real requirements are in the metro access/metro core space. DWDM is a useful solution for high-growth routes that have an immediate need for additional bandwidth. According to vendors, carrying that are building or expanding their long distances networks could find DWDM to be an economical way to incrementally increase capacity, rapidly provision needed expansion, and “future-proof” their infrastructure against unforeseen bandwidth demand.

DWDM is well suitable for long-distance telecommunications operators when we use either point-to-point or ring topologies. The availability of 16, 32, or 64 new transmission channels, where there used to be one, improves an operator’s ability to expand capacity and simultaneously set aside backup bandwidth without installing new fiber. Proponents make the case that this large amount of capacity is critical to the development of self-healing rings. By deploying DWDM terminals, an operator can construct a protected 40 Gbps ring with 16 separate communication signals using only two fibers. However, unless there is a major underlying engine continuously driving the demand through the roof, this kind of technology is a “one-time (in a long time) upgrade,” with obvious market-sizing implications.

There has been a lot of hype in the recent past about metro DWDM network, Some supporters of DWDM claim that the acceptance of the technology will drive the expansion of the optical layer throughout the whole telecommunications network and allow service providers to exploit the bandwidth capacity that is inherent in optical fiber,But at present there are still a lot to be exploited. The widespread introduction of this technology, however, could at the same time will appear a lot of problems, it will lead to a long distances bandwidth glut and price disruptions, and set expectations for price points at the metro access/metro core that may or may not be achievable. Finally, one finds with some satisfaction the following quotes:”With so much unused fiber, when will metro nets really need WDM? What are the requirements for 40 Gbps systems? What are the new economic trade-offs between transparency and grooming. And which of the new service providers will succeed?”.

The related question for the current discussion is whether DWDM has practical application to the metro access/metropolitan environments, probably for a handful of POP-to-POP rings. If DWDM systems now in the market were redesigned to be optimized according to the requirements for metropolitan environments,  there could be increased applicability. If the systems were redesigned to meet specific price points, then their applicability would be enhanced. When the long distances industry saw major retrenchments at the turn of the decade, a number of optical vendors took the easy course of relabeling the equipment that had been developed by them for long distances applications and pasted a “metro DWDM” label onto the equipment while at the same time generating new marketing collaterals, rather than redeveloping, as would have been more appropriate equipment that is optimized and right -sized for metro access/metro core applications from both density and cost points of view. It appears that, at least for the next few years, the opportunity for metro DWDM is somewhat limited. As noted earlier, this technology may see some penetration in a metro core application of POP-to-POP rings, but extremely limited application in the metro access segment.

Systems with DWDM technology have been used extensively in the long distances space and typically cos from 100 thousands to 1000 thousands dollars or more. There are economic advantages in using DWDM when the transmission costs are high, such as in long distances applications. Such use is justified by standard transmission -versus-multiplexing cost calculations. For example, to transmit 40 Gbps over 600 km using a traditional system would require 16 separate fiber pairs with regenerators placed every 35 km for a total of 272 regenerators. A 16 DWDM wavelength channels system, on the other hand, uses a single fiber pair and four amplifiers positioned every 120 km for a total of 600 km. At the same time, new Extended Wavelength Band (EWB) fiber is being introduced that allows a wider range of operation for the transmission system; some Coarse Wavelength Division Multiplexing equipment (which is more ideal for metropolitan environment) will make use of the E-band.

Even in long distances applications, design considerations aimed at optimizing the cost profile are not always straightforward. In particular, TDW-only solutions supporting increasing speed have kept pace with a number of advantage in the WDM technology during the mid-to-late 1990s, at least for medium-size trunking application (up to 10Gbps). For example, a TDM-based solution has only one 10 Gbps SONET terminal. A WDM system that transports an aggregate capacity of 10 Gbps requires four 2.5 Gbps terminals in addition to a WDM terminal per end. Because TDM technology has typically quadrupled its capacity for a cost multiplier of 2.2, the 10 Gbps solution appears to be more cost-effective. However, if the TDM system also requires four 2.5 Gbps terminals to provide the first stage of multiplexing, the 10 Gbps solution might actually be more costly, and but we have to note that if the 2.5 Gbps terminals are already in the network, they represent a sunk cost and might not be included in the cost analysis.

Before optical line amplifiers were developed and deployed, high-speed TDM-based systems were more cost-effective than WDM because the TDM systems allowed multiple lower-speed electronic regenerators at a point in the network to be replaced with a single higher-speed regenerator at that point in the network; originally, this was not the case with the WDM design. The introduction of optical line amplifiers with the ability to amplify the entire ITU grid frequencies simultaneously allows multiple lower-speed electronic regenerators at a site to be replaced with one optical amplifier, making WDM more cost-effective.

Fiberstore designs, manufactures, and sells a broad portfolio of optical communication products, including passive optical network, or PON, subsystems, optical transceivers used in the enterprise, access, and metropolitan segments of the market, as well as other optical components, modules, and subsystems. In particular, Fiberstore products include DWDM related professional components. Welcome to visit our online store to know more about DWDM information anytime. http://www.fs.com/